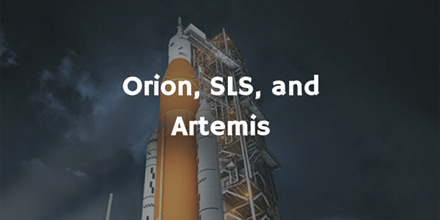 I have written previous blogs in May 2016 on the Orion project. These Orion components are required for the newest and largest of NASA’s Moon Rockets. At the time a project management term “Critical Path” turned up in a press release.

Updates on the Orion project were also mentioned in one of my Info-Letters in December 2017.

Now updates of the SLS (Space Launch System) are in the news of read the full article here.

Orion is the crew section of the rocket which will return man to the moon, to Lunar orbit, to Mars, and possibly further.

The SLS (Space Launch System) is the rocket that will enable the crew, resources, and supplies to leave earth and get to lunar orbit.

Orion will be larger than the Saturn 5 rockets used for the Apollo missions, and will carry a crew of 4.

One plan is to establish a Lunar Orbital Space Station ‘Lunar Gateway’ – starting in 2024. This will allow landings to any part of the moon, rather than just the equatorial regions. This is important as there may be water stored as frozen ice at the lunar poles.

A Lunar Gateway will allow multiple landings on the moon, and act as a staging point for missions to Mars. It is thought that rocket fuel produced chemically from lunar rocks will cost a fraction of the price of fuel produced on earth and then moved into orbit.

One major concern is that there are no firm designs or constructions for a Lunar Lander yet. This is clearly a key components of returning to the moon,

The space missions are to be named after “Artemis” who was the twin of “Apollo” in Greek mythology. Currently the schedule for missions is as follows:

However, given that funding is tight, and dependent on politics in the United States, delays may occur.

Whilst astronaut safety is paramount, and budget limitations are inevitable, expect schedule delays as the only option available to deliver a safe programme.