How Not To Use a Gantt Chart

How Not to Use a Gantt Chart 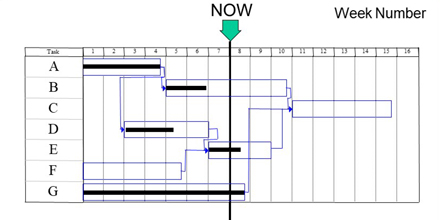 Take the Gantt chart above. It suggests a 16 week project with 7 tasks A-G. It is now the end of week 7, and I will now look at some of the issues relating to monitoring progress using this Gantt Chart. According to the Wiki, Gantt charts were created to show if production was on, ahead, or behind schedule. I’m going to suggest that the above snap-shot tells us very little about the tasks.

Task B depends on Task A. We cannot tell if Task B started on time (as we don’t know when Task A finished). According to the solid black line inside the Gantt bar, Task B appears to be behind schedule. However, we do not know the profile or contour of work. How was the work distributed through the 6 week duration of task B? Perhaps most of the ‘Effort’ takes place in the last two weeks. Perhaps Task B is actually ahead the effort planned.

So what questions should we ask Task B owner?

Gantt charts are only accurate at the point of time they were created/captured/printed.

Now according to our Gantt chart Task C has not started yet. In fact it is not due to start for 3 weeks. So no need to ask for a status update then? No!

Task C was estimated at a 5 week duration and scheduled to start week 11 and finish in 15. However these estimates were made at least 7 weeks ago when the plan was created! Does the Task C owner still think that it will be a 5 week duration task? Having seen the outputs of Task A and B (so far) will task C be starting on time? Are there any resource issues (not shown in the Gantt chart). We need an update on the task even though it has not started.

Task D depends on Task A with 2 weeks “Lead Time”. Lead time means that Task A did not have to finish, just complete about 2 weeks of work.

Progress of Task D will depend on how Task A progressed (and that is open for debate on the given information).

According to the Gantt chart Task D should have been completed a week ago, but it appears to be at least 3 weeks late. So was Task A delayed? Did Task D start on time? Did Task D ignore the ‘Lead’ and start when Task A finished? We need to get a status on Task D that is sensible and generates some discussion. Bad questions include:

Good questions to ask would be:

Asking the right question in the right way is essential in achieving constructive answers.

We now look at the issues surrounding Task E.

According to the dependencies, Task E should not have started until both Task D and Task F have been completed. However there already appears to be progress reported on Task E.

So were the dependencies wrong? Can the first part of Task E be completed without waiting for Task D and Task F. This would be something to note for a project review. Perhaps the Task F owner is working on Task E in preference.

Task F. Oh dear. According to the Gantt chart nothing has happened.

Is Task F no longer required? Has functionality been removed from the project specification? Is the task owner sick? The non-progress of Task F should have been identified at a project meeting 6 weeks ago, and actioned then. Currently it needs to be raised to the project sponsor as a serious problem.

Task G appears to have been finished, and finished ahead of schedule. Were the estimates of work and duration too great? Were the resources working on Task G (because they enjoy doing it) rather than Task F or Task D? When did Task G finish? It might have finished 1,2,3 or more weeks ago. Again, we need to refer to previous status charts to really understand what has happened.

Sometimes Gantt charts are used like a drunk uses a lamppost. For support rather than for guidance.