Back in April 2016 I looked at the project management topic of “Benefits Realisation” using Big Ben’s £29 million refurbishment project as an example. You can read the original blog here.

This project is now progressing, and has again recently been in the news.

On August 21st 2017 Big Ben fell silent for repairs to commence. The Bell will only sound for special occasions such as Remembrance Sunday and New Year’s Eve.

The bell is to be silent because of health and safety fears for the maintenance operatives. These include hearing concerns, and scaffolders being surprised by the sound (the clock face is 55metres, and the tower is 96meters high).

The name Big Ben is thought to derive from Sir Benjamin Hall, who was first commissioner for the project works in the 1850s. The Bell was installed in 1858, and first rang out in 1859.

The bell has previously fallen silent in 2007 and 1983, but not for as long as the predicted 4 years during this project. This has led to some complaints that the iconic sound will not be heard. One suggestion was that the bell could sound at night. However it takes around half a day to reset the chimes so this solution is unworkable. Regardless the planned 4 years of silence now being reviewed. 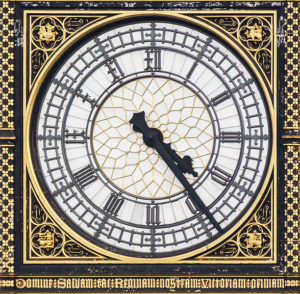 The project consists of an essential programme of work and is for much needed maintenance. Problems have already been identified with the clock hands, clock mechanism and the pendulum. All of these need to be dealt with immediately to ensure that the clock can continue to work properly.

One source quotes that the clock dismantling and repair will take around 2 years alone, although an electric motor will be used to show the correct time on at least one face of the clock tower.

Other project details concern conservation back to the original design, and repairs to cracks in the masonry, corrosion on the roof and on the frame that holds the bells. Leaks, erosion and “severe rusting” of the metalwork are also affecting the tower.

Finally work includes bringing the tower in line with fire prevention guidance, and health and safety measures for staff and visitors need to be improved. A lift will also be installed to improve accessibility.

The project budget is still quoted as £29 million but there are fears that it could rise to £60 million. With the contract due to be announced in Autumn 2017, expect further headlines regarding the project.

Edit September 30th 2017: The project budget has indeed increased from £29 million to £45 million, with contingency funds increasing to £17 million from £6 million. Details from the BBC website.

High visibility projects, talked about in the media, can raise sensitivities over the inevitable changes required during the course of a project. Keeping stakeholders engaged is important. What might be quickest for the project may not suit all of the stakeholders. Bad press may cast a poor light on even a successful project.