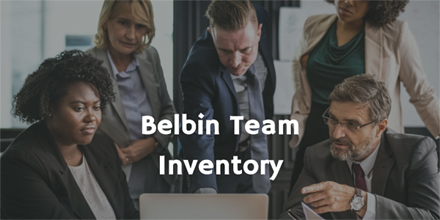 Perhaps the most famous models for team roles was developed by Meredith Belbin in the 1970’s. Belbin suggested that a high-performing team contained people fulfilling 9 roles:

Used in many organisations during training exercises or people development (including Project Management courses), the ‘test’ is useful at looking how team members will behave when interacting with other team members.

Whilst it is not a test with correct answers, or with a pass mark, there are a series of short answer questions to read – and you can select and weight your answers as you see fit.

For example; there are sections on “how you believe you contribute to a team”, with 8 possible answers. You have 10 marks to distribute between these 8 answers, and you could score one with 10, and the rest zero, or choose 5 to score at 2 each.

I find the best way to do the test is at several points through a week, hiding my original answers to see if I apportion the same marks to the same answers, although this is not necessary.

A score sheet in then compiled using your responses to interpret your preferred team roles. It may be that you score high in several areas, and low in others.

When conducting the test, I make sure that I avoid the words ‘strengths’ and ‘weaknesses’, but rather say ‘preferred roles’ and ‘less preferred role’. 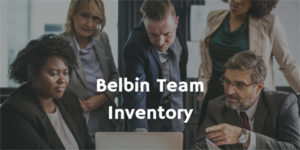 The Belbin Team Inventory roles can be further divided into three categories:

Here is a full description of the roles in those categories:

As mentioned previously, a single person may score highly in one, two, or three roles, and therefore be seen to favour these roles. They may score low in some roles, indicating a preference not to do them.

In theory all 9 team roles need to be present for a successful team. That does not mean ‘at least nine people’, but rather that all of the roles need be present and scoring highly within the team.

If a role is missing (or low scoring), it may be enough to be conscious of that fact, and ask somebody to assume one of their lesser preferred roles to counteract the absence.

Another tactic is for the ‘Leader’ – read ‘Project Manager’ – to pay attention to the missing role (presumably one of their lesser preferred roles) to ensure a successful team.

At a glance, I think that the Belbin Team Inventory is usually quite good at reflecting how people like to work, and their desired ways of working.

I have taken the Belbin test at various points in my career. Far enough apart for me to forget the questions and the answer scores for the tests to be independent. Each time my ‘preferred role’ changed. People should recognise that their Belbin profile is not fixed for life.

Belbin really is a ‘Behavioural’ test, looking at how individuals interact with others, and behaviours can change over time.

What the Belbin test did for me each time, was to reflect my current job role; Once as project manager on a research project (Plant), once as a team manager for a help desk team (Completer Finisher), and once as an IT coordinator for a vehicle project team (Resource Investigator/Specialist). Those represent three totally different jobs, and naturally my Belbin role profile changed to reflect those job positions.

The Belbin Team Inventory is just one team role test, and as described above, is based on behaviours. I have also used the Myers-Briggs  Type Indicators with individuals. This test looks at personality types, and I firmly believed that my Myers-Briggs test results reflect me as a person, rather than the job role I am performing. This is because it is a ‘personality’ type test, and personality changes far less than behaviours.

This then provides information about a personality based on the 16 possible results of the assessment, and people talk about their ‘type’ characterised by the 4 letters. I have taken this test twice, in 1993, and 2000, and come up with exactly the same personality type – I-S-T-J.

I have witnessed some very good classroom demonstrations of what can happen when you take people out of their ‘comfort zone’ in simulated work situations. This includes the people interactions that take place when you put like-minded people together, or separate them, and how these people feel about the situation. This is what must be done to use the personality results from individuals and understand how those individuals may interact in team situations.

When considering the various tests for team working, make sure that you distinguish between behavioural tests, and personality type tests.

The Belbin Team Inventory helps you understand how people prefer to operate in a team role – at a point in time. It may explain some of the interactions that take place in a team as it develops from a group.